Trending
You are at:Home»Reviews»Films»[WATCH] The Day a Pig Fell Into the Well – Film Review

[WATCH] The Day a Pig Fell Into the Well – Film Review

WARNING: This film contains no pigs and no wells. 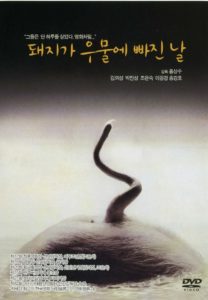 But, it does contain scenes of angst and daily life in 1990s Seoul from the point of four different characters. The story broadly follows novelist Hyo-seop who fails to get his career off the ground; even his co-workers think that his writing is no good. On a night out, he gets drunk with some friends and ends up imprisoned for fighting a critic.

Hyo-seop falls for a married woman, Bo-kyung. At the same time, Minjae, a girl working at a local cinema, dreams of marrying a writer. There is something truly wholesome about her desire to help him complete his manuscripts, but the manner in which she is presented that makes her desires seem somewhat lofty and self-motivated. We follow the story between these characters as well as Bo-kyung’s husband, Dong-woo, creating a strange cluster of romances to follow, albeit not a particularly complicated combination.

This is film director Hong Sang-soo’s debut body of work, and a largely successful piece as well. It is clear comparing The Day a Pig Fell Into the Well (!996) and Hotel By the River (2018) that he has only able to improve his craft, and also adapt to the requirements of twenty-first-century Korean film.  The Day a Pig Fell Into the Well is much more leisurely and slow-paced. The focus revolves around the characters themselves, with much less use of mid-close ups. Viewers are encouraged to interpret facial expressions from much further away, rather than being spoon-fed their emotions by close-up shots. The film has a naturalistic undertone to it too, feeling far away from the precision and dramaticism from Korean entertainment that we know today.