Trending
You are at:Home»Reviews»Films»[Watch] #ALIVE 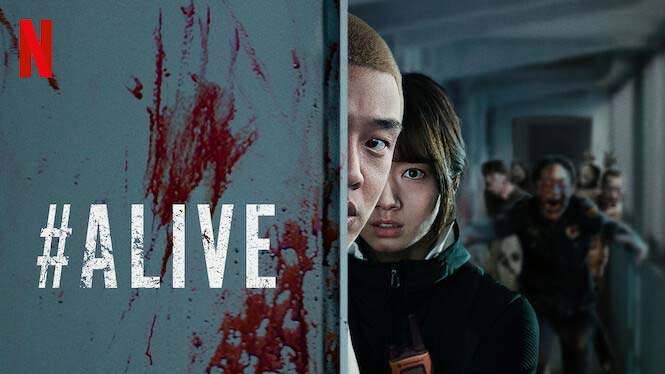 A great way to summarise this Netflix original movie is: Millenials vs Zombies.

Judging by the title, and its use of a hashtag, it immediately allows us to predict the particular demographic of the film as well as the age range of the characters. As a huge fan of Yeon Sang-Ho’s “Train to Busan”, arguably one of South Korea’s most popular movies, watching the trailer for “#ALIVE” didn’t give me much hope that it would top Sang-Ho’s ‘Zombies on a train’ film. And after watching the movie, that opinion still remained valid.

Throughout the entire film, we follow Oh Joon-Woo, a video gaming live streamer who lives with his family and beginning the movie with him streaming an online game with his friends. After being told to switch on the TV by his friends, he soon discovers that a virus is spreading across his city and South Korea, infecting humans at a rapid rate. A news broadcast reports the infected civilians as being “Ruthlessly violent” and “Viciously attacking the passers-by”, describing its origin as a “small riot”. From Joon-Woo’s balcony, he witnesses chaos unveiling, as tenants of 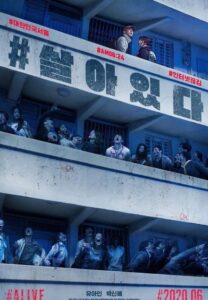 the various apartment complexes’ that surround his own, begin to evacuate from their homes. He soon realises that some of the panicking civilians begin to feast on one another, cannibalistically ripping flesh from their bodies and then turning into one of the “creatures” themselves. It is also worth noting that the term “Zombies” is not used, something I’ve came to notice as someone who loves the zombie film genre. It’s as if the term does not exist within these worlds and is also done with intention for “#ALIVE” due to the movie only covering a month, probably not enough time to label these creatures, even if us viewers clearly know they are zombies. Instead, they’re labelled as “Creatures” by Joon-Woo.

One of my favourite parts about this film, is that it throws you straight into the apocalyptic world, within the first two minutes. Instead of hearing a long-winded backstory, we can jump straight into the good stuff, gore, blood, tension. Some may prefer a little context to add to story, as well as serving as a comparison for what Joon-Woo’s life was like before. However, as a gore and zombie lover, it was perfect for me.

However, here’s where I get a little nit-picky…

As the movie centres around millennials, it would be predictable that it would include humorous scenes involving the typical attitudes and stupid risks the youth would be willing to take in today’s generation. This is all good and well, but when it includes a young man, falling from the edge of his balcony because he tried to get a signal for a facetime call and for his friend to livestream it, it makes me think… Do they think we’d be that dumb in an apocalypse?… However, Joon-Woo does remind me of one of those characters that would die first in a zombie apocalypse and I was extremely surprised that he didn’t. For a start, he allowed his neighbour inside his apartment without checking for bites. Instead of collecting tap water before the supply ran out, he played video games or vlogged and slept for a good proportion of the film. And the most frustrating of all, constantly kept making unecessary noise, shouting at a zombie and repeatedly slamming his door shut throughout the movie.

Rule number one of living in a zombie apocalypse: DON’T MAKE UNECESSARY NOISE! 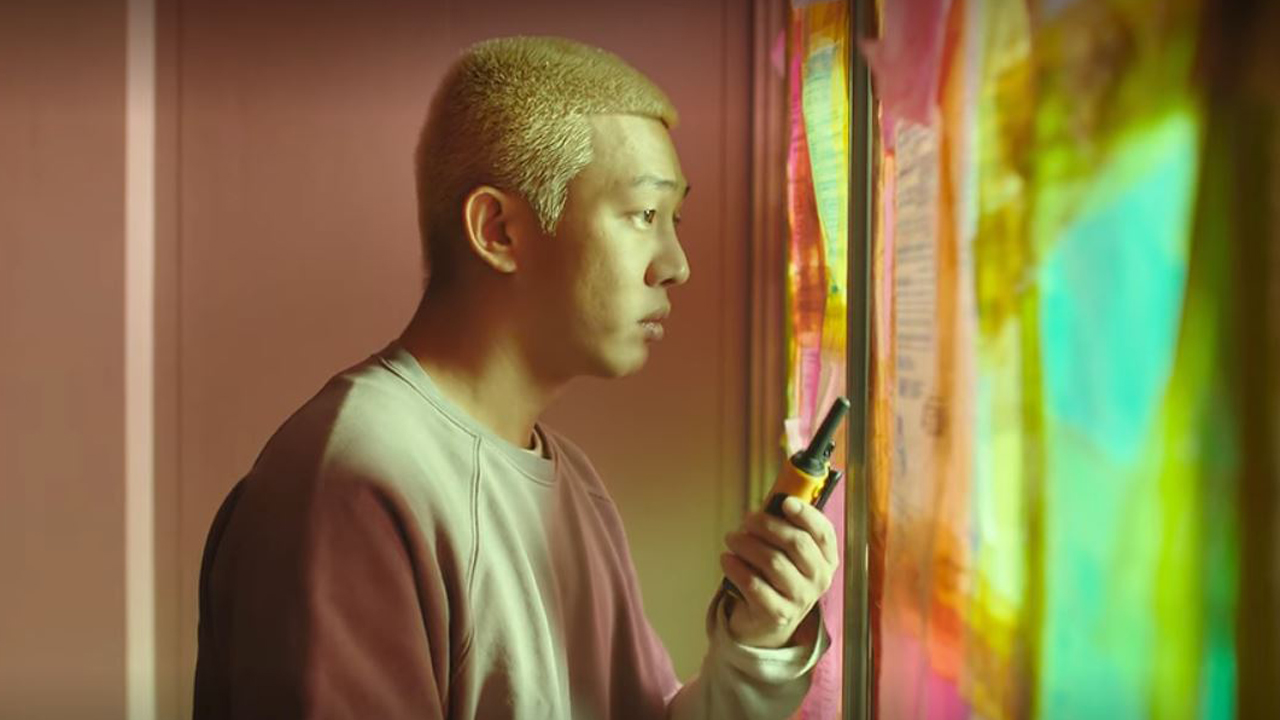 After thinking there’s no point in going on, he decides to end his life, finishing with a goodbye vlog. However, before he could follow through, he is shined in the face with a laser from another apartment, effectively saving his life. This is where we meet Yoo-Bin, another survivor living opposite Joon-Woo in another apartment complex. After days of speaking over walkie-talkies and sending food via a chord stretched from one apartment to the other, with the help of a drone, they decide it’s time to move to the presumed deserted eighth floor. As a viewer, I really saw Yoo-Bin’s badass character shine through after ziplining from her apartment to the dead-infested carpark and fighting them off one-by-one. Joon-Woo observes for some time, watching her risk her life to fight off the dead… while he watches. He does eventually appear, helping Yoo-Bin after being pushed over by one of the dead.

The two eventually make it to the eighth floor and are welcomed in by a third survivor, Bae-Soo, who gifts Joon- Woo and Yoo-Bin with food and water. Although he appears to be a saviour, rescuing the two from imminent, life-threatening danger, his hidden motive becomes clear after Joon-Woo passes out shortly after accepting a tin of spam and a glass of water. Yoo-Bin shortly loses consciousness too and is dragged into a baby’s room to find one of the dead connected to a long rope, Bae-Soo holding the other end of the rope and slowly allowing this woman, who we discover to be his bitten wife, crawl to Yoo-Bin. Miraculously, Joon-Woo regains consciousness and manages to release Yoo-Bin, after Bae-Soo believed she was dead due to the lack of noise. Which of course, she somehow wasn’t dead despite having her hands zip-tied and having to fight off the undead, walking away without a single bite. Yoo-Bin manages to cover the wife’s face with a cloth and turn her on Bae-Soo.

With one bullet both Bae-Soo and his wife are shot, despite there being knives in the kitchen, which attracted a herd of the undead towards that apartment. Faced by the realisation that they were as good as dead, Yoo-Bin begged Joon-Woo to shoot her, forming a suicide pact before being ripped to shreds by the cannibalistic undead. However, after hearing the sound of helicopter propellers, they decide to make their way to the roof, fighting off more of the undead and yet again, walking away without a single bite. Despite one scene where Joon-Woo held a hoard off with a bike, yet none of the zombies decided to bite his hand? The two are conveniently rescued by members of the army firing a machinegun out of a helicopter.

The thing that bugs me the most about this movie, is how unrealistic it is. The two should not have survived, there were too many plot holes that weren’t helped by the sudden cut in the scene (one scene including Joon-Woo running from a hoard and could only remain safe by cutting to the next scene where he’s hidden). It feels like the two repelled the zombies, as despite the countless opportunities for them to be bitten, they walk away without a scratch. It feels like this was done due to occasions where Joon-Woo would not have survived, and the change in scene forces us to believe he survived, without any explanation. There were even occasions where countless zombies grabbed onto Joon-Woo’s legs. If it only took one small bite on the hand for Joon-Woo’s neighbour to turn, there were so many occasions where the zombies could have bitten him yet somehow weren’t able to! Although Joon-Woo is a good character with good intentions, his lack of initiative, thought and common sense made me extremely annoyed with him…

How did he not get bit?!

Despite these blatant annoyances with the movie, I did appreciate the makeup and special effects. The close-up undead had the closest resemblance to rotting flesh peeling from their faces, whereas the ones that were further away, looked like they had been hit in the face with a bag of flour. The zombies movements were quite clean, and the sounds of cracking bones made me cringe, the aesthetic of the dead were definitely a positive for the movie. However, with the large amount of plot-holes and the judgement I made half way through the movie that they should definitely not be alive, it’s hard to say I totally enjoyed this movie as much as “Train to Busan” for example.

You can watch “#ALIVE” on Netflix!