Trending
You are at:Home»K-Culture»Friday Foods»[Food Friday] How Spring Onion Chex Cereal Came to Be

[Food Friday] How Spring Onion Chex Cereal Came to Be

In 2004, Kellogg’s, the owners of Chex in Korea, set up an online poll for children to decide on the new flavour of cereal. The two flavours were based on the two mascots from the cereal advertisements; extra-chocolatey to resemble the chocolatey Shreddies-like hero, Cheki, and spring onion flavour for the villain, Chaka.

Naturally, Kellogg’s anticipated that the more appetising of the two cereal flavours (extra-chocolatey) would win. But they were horrified when internet forum members hijacked the voting website and made Chaka the front-runner. With two weeks left to go, Kellogg’s, who had prepared a warehouse full of the chocolate flavour cereal, tried to curb Chaka’s win by opening in-person and telephone voting, as well as eventually closing the online poll early. However, they were unsuccessful, and Chaka was the winner. Kellogg’s declared Cheki the winner, stating that many of the votes for Chaka were abnormal and therefore didn’t count. The chocolate cereal was released and Kellogg’s hoped it sweep the entire situation under the rug.

However, the internet forgets nothing, and soon after Chaka became a meme standing for political democracy and freedom. Kellogg’s jumped back on the bandwagon sixteen years later, finally releasing the spring onion flavoured breakfast cereal. The promotional flyer poked fun at Chaka’s symbolic meaning, combining an image of the green wheat pillow and the “Yes We Can” slogan from former US President Barak Obama’s 2008 election campaign. 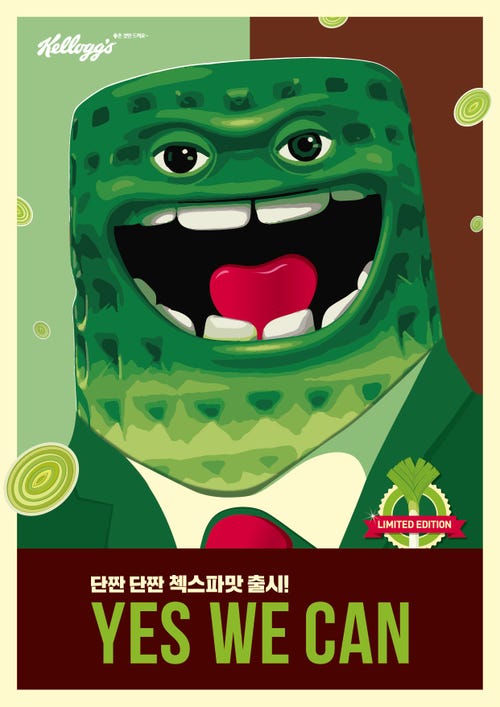 While the flavour itself has been widely confirmed to be quite gross, the advertising campaign has been highly successful. At the time of writing, a box of spring onion Chex on Ebay would cost you just shy of $30 (£22). That’s the price of six 750g boxes of chocolate Shreddies! It’s an interesting concept and proves that food doesn’t necessarily need to be marketed as a delicious treat in order to be a raging success. But, would you try this?